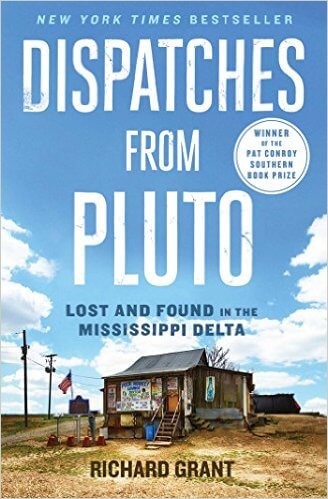 Dispatches from Pluto by Richard Grant is a travel book and memoir about his move from New York City to Pluto, Mississippi, deep in the Delta region of Mississippi. I read the book in the fall of 2016.

I’ve been a big fan of Richard Grant for a while. Along with Paul Thoreaux and Ian Frazier, he’s one of the few travel writers I buy books from, rather than finding them at the library.

He’s adept at traveling to fascinating parts of the world and writing a travel book full of nuance. He captures the complexities of the region rather than just being a voyeur or outsider making first impressions.

That approach is helpful since there is a long tradition of Northern writers coming to the Deep South to write about and report on the contradictions and stereotypes of the region…without exploring the full complexities of what the region is like. Even though Dispatches from Pluto is about a Northern writer coming down South, Richard Grant does an excellent job being self-aware of that writer’s trope.

He and his girlfriend do more than simply travel through the region. They buy a large plantation-style house and move in as permanent residents. He’s now lived there for several years sticking with his original commitment – and even writing a follow-up book about Natchez, Mississippi.

Overall the book was fast, entertaining, engaging, and, as far as my experience of growing up and living in the Deep South, very accurate and valuable.

Grant does an excellent job of capturing what it’s like to live in the Deep South, with all the heat, humidity, and history. The book is full of funny anecdotes and experiences. One of the most amusing sections is when he’s trying to grow a garden. The problem isn’t that the garden doesn’t grow; everything else wants to grow and overtake it. It reminds me of trying to grow a garden in my Atlanta backyard, only to have it overrun with kudzu and more weeds than I knew existed.

I like how it’s definitely a travel book, but since he purchases a house and lives in it, the book has much more of a memoir vibe. He can have a recurring cast of characters – whether it’s neighbors or people he meets in other towns. One of the significant downsides of a travel book is that the author rarely revisits a place to see how things have changed. But since the author here is actually living in the region he’s writing about, he can write a much fuller sense of the place.

I like how he went out of his way to meet a broad cross-section of people living in the South, both by race, class, and age. So many of the problems and rewards of living in the South are both very straightforward and complex. He was able to experience different events and cities, and people throughout the year. He hangs out with everyone, from Morgan Freeman to a lone Black farmer, a wealthy in-town writer, and retired white neighbors. And I liked how he went to traditional barbecues in the summer, and went hunting in the winter, tried to renovate his house in the spring, and grow a garden in the summer. He visited legendary places (Clarksdale blues joints) and tragic places (Emmett Till’s memorial). He’s descriptive about his characters and places, and people.

That the book ended!! It’s a quick, fun read, and I really couldn’t think of anything I didn’t like.

The American South has changed so much over the past 100 years, and even the past 30 years. Issues and problems that seem like they’re in the distant past weren’t all that long ago. The people who experienced poverty, discrimination, hatred, and rapid transition from agricultural to manufacturing to service economy are still alive even in 2021. My grandparents were in their twenties when the last lynching happened in their county. They both distinctly remember the streets of their local town being blocked with cotton bales. They talk about harvesting cotton, dirt roads, and knowing neighbors who would eat kaolin growing up. Richard Grant confirmed all those stories and was able to go deeper since he’s a trained journalist and travel writer.

Owning an old plantation mansion is even more work than you would expect. I live in a historic neighborhood with lots of homes built in the 1880s. And my uncle owns an old homestead that was built in the 1840s. So, I’ve heard anecdotes of maintenance horror stories and the sheer amount of work that it takes to maintain one of those homes in the heat and humidity of the Deep South. But Richard Grant talks about how much work it is to own one of the homes that might appear in Southern Living magazine or Architectural Digest.

I learned a lot simply from his conversations with everyday people of all races and classes. So much of the South is still heavily segregated by both race and class, so a lot of times, it’s hard or at least not customary to have conversations or interactions with people who are living in the same place as you…but also not living the same experience as you. So it’s always good to be able to read about those perspectives in those experiences.

I learned a lot about Mississippi and how its politics and history happens. I’m glad I read The Warmth of Other Suns before reading this book. It put a lot of the demographic and economic change in perspective. It’s also interesting to read about a state in the Deep South that has no major urban area and how that changes the politics and economic development strategies. I live in Atlanta, which is almost like its own little non-southern world amid the Deep South. And it makes Georgia’s politics and economic development very different than Alabama, Mississippi, Louisiana, or Arkansas.

Overall, if you’re looking for a travel book, especially a US travel book, I highly recommend picking up Dispatches from Pluto. It was available at my library last I checked, but it’s also pretty cheap on Amazon or Alibris.