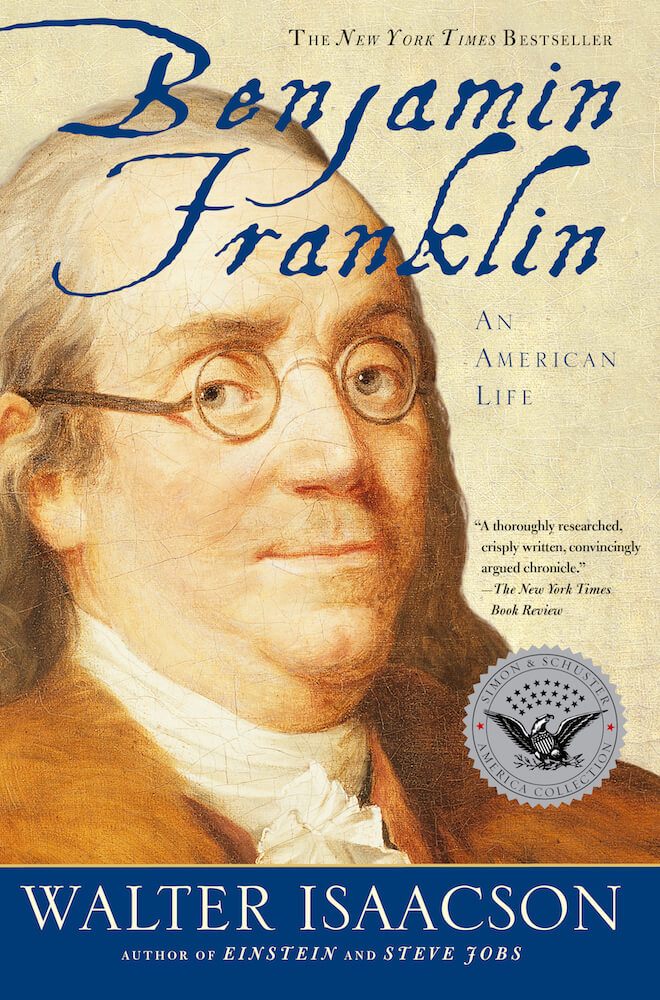 Human felicity is produced not as much by great pieces of good fortune that seldom happen as by little advantages that occur every day.

That is one of the many, many memorable quotes from Walter Isaacson’s biography of Benjamin Franklin.

I picked this book up immediately after hearing Elon Musk talk about it (and later finding a whole slew of fans of it). It’s 500 pages – and well worth the read.

I had always had this sort of elementary school version of Ben Franklin in my head like most every American, but I was really blown away by just how ingenious, influential, industrious, and insightful Ben Franklin was.

All the mythmaking in American history does Franklin wrong. He was very much human – but he really was beyond remarkable.

And he got that was by “little advantages that occur everyday.” He certainly was born into the exact right place and right time, and certainly had plenty of people help him along the way, but he really was the epitome of doing the right things every single day, constantly trying and failing at stuff, and meeting and helping everyone he could to be that successful in nearly everything he did.

Franklin started out as an entrepreneur – and referred to himself that way until his death. He started and ran a printing operation that he eventually franchised up and down the 13 Colonies. I had no idea.

He pretty much had a printing empire, and the story of how he built it during his 20s and 30s is really remarkable, and what I found to be the most interesting, and well paced portion of the book.

So, when business was slow, Franklin would take a wheelbarrow out and push it up and down the street to show off and become known as “that hard-working young printer.”

Franklin “retired” (err, turned his business 100% to employees) in his early 40s so he could dedicate more time to his experiments.

And the experiments he did were constant and crazy in a way – especially in an age that was very skeptical of science (he was called a ‘conjurer’ by many).

But I had no idea the impact he made on the history of science.

He was up there with Newton and Bacon. He doesn’t get the same adulation mainly because he never authored a single magisterial work.

All the time. And he wrote everything down.

Over time – his experiments paid off and he got major results.

His discoveries with electricity (yes, the whole kite deal is very true) pretty much ended lightening fires in cities – which were a constant plague before he invented the lightening rod.

Oh, he also discovered the Gulf Stream – among dozens and dozens of other discoveries.

He was experimenting right up until his death.

Later in life, he was pulled into politics first by the Penns (the rulers of Pennsylvania), and then by the British.

The whole section on the War For Independence was fast-paced, and really fascinating with much too much to summarize here.

Side note – I did not know that he was the only person to have signed all 4 of America’s Founding documents (the Declaration, Treaty with France, Treaty with Britain, and the Constitution).

On the structure of the book – Walter Isaacson really tells the story well, and as an actual story rather than a list of life happenings. The only time that the book is not a page-turner is the bit of Franklin’s life in France after the Treaty has been signed. But even there, it’s still a great mix of narrative, characters, anecdote, and happenings.

My main takeaways from the book were a much better understanding of American history, and why Americans think and act the way we do; that little things done everyday add up over the course of a life; that you should always be trying things – striving to improve and grow; that family relationships can be hard to repair once broken (the area that Franklin did not do well); that Benjamin Franklin is one inspiring guy – and is much, much more than you learn about in history class.