You are here: Home / Reviews / Books / One Summer by Bill Bryson Book Review 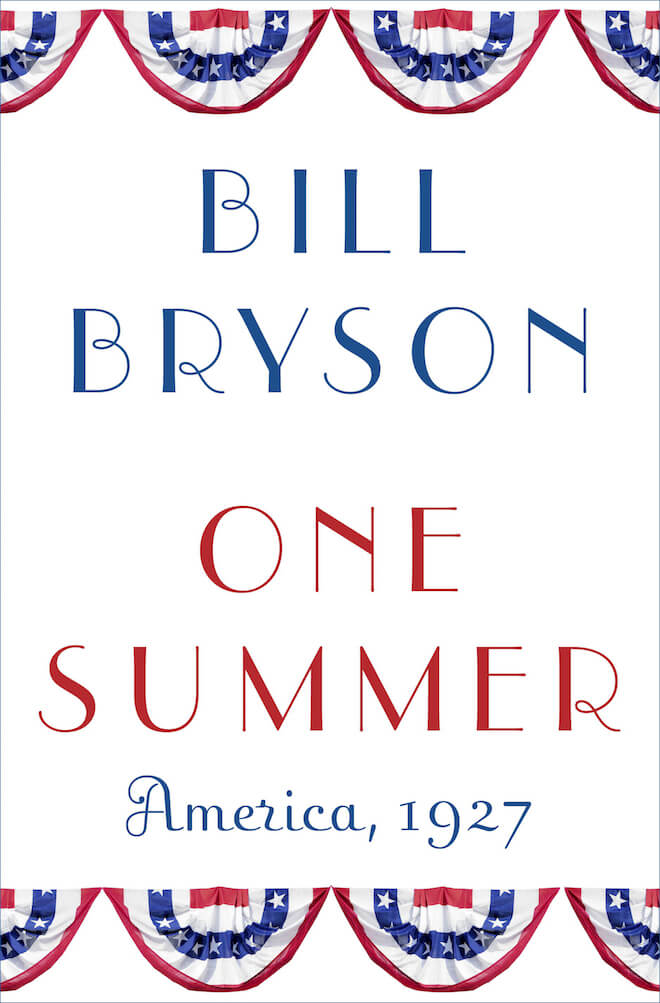 Or that’s what Bill Bryson argues and writes about in One Summer. He’s the master of taking otherwise dense and boring topics (like the History of Knitting) and turning them into an engaging, interesting, and amusing book (such as At Home)

One Summer is a book that takes a few key events of summer 1927 and interweaves them in such a way to give a full picture of what living that summer in America must have been like – and how so much history can happen all at once to set the stage for the years ahead.

Without spoiling the book – the major events of the summer in 1927 were,

All of those events, while important, are not notable in comparison to, say, the bombing of Pearl Harbor, but they all add up to form the foundation of so much of our modern life. And that’s the story that Bill Bryson weaves in One Summer.

One Summer: America, 1927
See Price on Amazon Also may be available at your local library!

Like all Bryson’s books, the narrative and structure of the book makes all the difference. He’s a master of taking diverse & complicated topics and weaving them with anecdotes to create an amazing story. The narrative of One Summer is basically 3 big arcs – Charles Lindbergh, Babe Ruth, and Everything Else that alternate in each chapter and interact with each other in unpredictable ways to keep the narrative moving along. He uses anecdote after anecdote to fill in every gap so that it’s the history book that you want to read.

It’s the decade that gets skipped over in school because it’s stuck between the World Wars. It’s dubbed the “Roaring Twenties” when everything was super awesome, and nothing much else was going on. And yet, it is a pivotal decade when in many ways everything happened especially since it was peacetime. During war, one thing gets all the attention. But, as Bryson shows, in peacetime everything else – cultural, social, innovation, sports, domestic policies, music, etc – can happen and change. Focusing on an otherwise ignored decade made the book particularly interesting.

It’s really difficult to call out anything I didn’t like with the book. To me, Bill Bryson pretty much can do no wrong as an author. I will point out a couple bits for any new readers though.

Just like At Home (the architecture section) and his other books, Bill Bryson does have one section around 2/3rds through where I think he spends too much time on a boring topic. In One Summer, it’s the Sacco and Vanzetti section. The entire book moves quite quickly on a great narrative, but it’s just a 15 page section where he wanders into the weeds a bit. It’s an interesting tale, but it requires a lot of background to tell correctly…and even then I don’t think anyone outside the 1920s can really grasp the nuance of the story (I imagine the trial to be sort of like the OJ Simpson trial in the ’90s).

The second point is mainly for anyone who has already read Bill Bryson’s books. Bill Bryson has pretty extreme standards to hit. Every single one of his books are so much fun, that any new book is going to have a tough time living up to his canon. One Summer was amazing – but coming off At Home, it didn’t feel as amazing as my expectations warranted. Compared to any non-fiction author, it’s one of the best. Just don’t let your “this is going to be twice as amazing as At Home” expectations kill it for you.

If you are a Bryson fan – One Summer lives up to his previous books (just don’t kill it with wild expectations). Go buy it (or place a hold at your library) and read it now.

If you’ve never read Bryson, this is a great book to start with, especially if you are interested in the ’20s. You should also check out At Home, Made in America, or Walk in the Woods.

Total aside, if you’re curious what 1927 looked like in color, here’s the first color footage of London ever taken. Great to look at before/during reading One Summer.