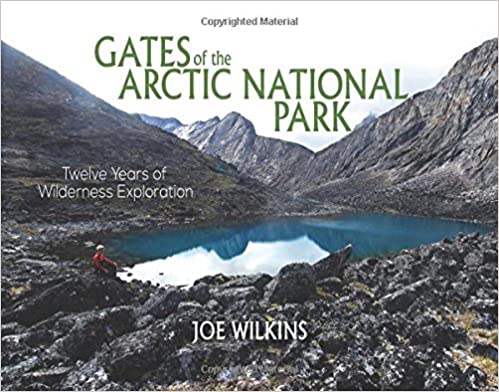 Gates of the Arctic National Park: Twelve Years of Wilderness Exploration is a special and unique coffee-table style reference book. I’d had my eye on the book for a while, and was gifted it last year.

It’s a photo / essay style book about Gates of The Arctic National Park and Joe Wilkins’ personal explorations in the Park as a volunteer backcountry ranger. It is one of very few (really the only) reference books about the Park, which is the most rugged and remote in the entire National Park System.

First of all, I’m glad the book exists at all. I’ve been interested in Gates of The Arctic for years, but there is actually very little about the Park, especially given that it’s a National Park in America. It just goes to show how remote & rugged the Park is. It’s amazing that the place exists at all. And I’m glad that it’s been documented for those who can’t visit it in person.

The book’s structure provides plenty of context about the Park. It’s not just pretty pictures of remote landscapes. Wilkins ties in the communities and people involved with the Park into the book so that you have good context.

Unlike a reference book from National Geographic or DK, the book has lots of personality from the author and from his trips through the Park. It makes the Park more ‘real’ and physical than, again, pretty pictures of faraway places.

The photography is varied and fascinating. And the essays are really worthwhile. Again, it’s crazy that the Park was only officially explored for the first time in the 1930s (by Robert Marshall) and his books are still one of the best sources of information about the Park. This book is such a good addition.

There wasn’t a whole lot, however, there are a couple things about the book that were likes, but also dislikes.

First, while the photography is excellent, I also don’t think it’s National Geographic or BBC level. I wished more photography could have been mixed in, especially of the “grand” places like the Gates or Arrigetch Peaks.

Second, I wish the book had more & better maps. I had to read portions of it with Google Earth pulled up.

Third, while I really appreciate the author, his history, and his work – I think the book could have stood out more with less author focus and more on the Park. However, I think this is only a quibble because this is the only real reference book about the Park (there’s no official Nat Geo to compare it to).

Gates of the Arctic is a truly special place. Not many people get to visit, and, like many special places, not many people should. I am deeply grateful that such a place exists in 2020 in America. In a hyper-developed, hyper-connected era in the most developed country on Earth…it’s crazy that there’s a place as remote and as protected as Gates.

I’m glad there’s both professional Rangers and dedicated semi-professional volunteers like Joe Wilkins looking out for the place and documenting it for the rest of us, so that we can appreciate & advocate for it.

I’m not sure it’s the greatest coffee table book in the world, however, if you are interested in Alaska or Gates of the Arctic at all, it’s definitely worth picking up.