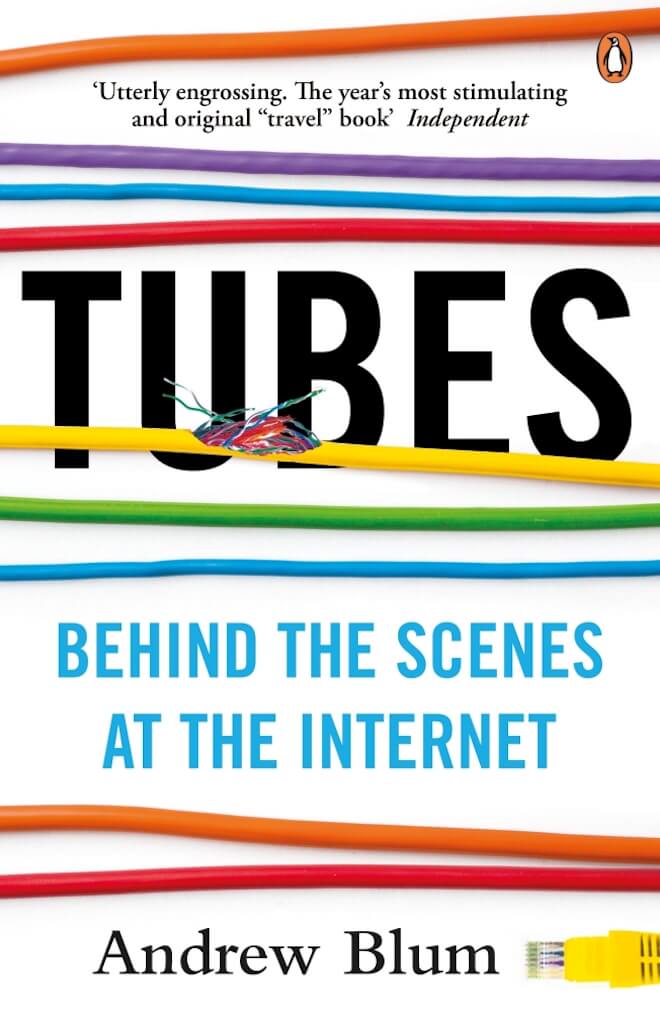 When I publish this post, the content will zip out of the back of my computer over my head to my wireless router.

From there, my router sends the info over to my modem – which is connected to “The Internet.”

Before I read this book, I knew that much.

I also knew that my website files were on a server somewhere outside of Houston, TX at the HostGator …???…place of some sort.

I know how to get to Houston via roads – but not via cables.

I could only guess in vague terms what exactly happened between here and Houston – much less what happens when I opened a website in The Philippines or somewhere else in the world.

And that is exactly what Andrew Blum seeks to explain in Tubes – and he does it quite well.

Andrew Blum starts, literally, with the cable running out of his house.

It never occurred to me just how small and unassuming the initial ‘on-ramps’ to the Internet would be.

He goes and explores one of Milwaukee’s ISPs – they have cables running from neighborhood hookup boxes to a central room in an unassuming building in the city. In that room – there’s just a big version of the wireless router that I have right behind me with their customers running into it – and a primary and secondary connection running out of it to a another network.

It is crazy to think that everybody on the Internet in Athens, GA (where I’m at now) – all that data and stuff goes to one building, to one (maybe two) routers, then off to the races.

Then, that network hooks up in the same manner at an even bigger router in Chicago to the huge, global networks – which have fiber optic cables between huge cities.

In buildings in cities, these big networks all join up (like 60 Hudson St in New York).

But what is crazy to me is how unassuming this vast, critical structure is (and just how few people there are who really, really know how to make the Internet work).

Fact – the fiber-optic cable across the Pacific – carrying Internet traffic from San Francisco to Tokyo is the size of a garden hose.

And that garden hose is literally just laying on the floor of the Pacific Ocean. Just sitting there.

In fact, recently – a new cable that was laid in the Outer Banks from New York to London was chewed up by sharks, slowing down the Internet by 1 to 2 milliseconds.

Which leads to the other astounding fact about the Internet – is show resilient it is.

There is a web of cables connected to lots of hubs around the world. If the cable from New York to London gets eaten by a shark – traffic get instantly rerouted to New York to Paris to London. Or New York to San Francisco to Tokyo to London.  It just keeps going.

And then there are the data centers.

That’s where your stuff is stored – your Facebook photos, your Gmail, your Netflix Instant, your pretty much everything.

And what’s amazing is that it its astoundingly…boring (the structures, no the storytelling).

I won’t go into a full description of that section, because I think that’s the greater point of the Internet infrastructure – and of Andrew Blum’s book.

The background of the Internet is super-boring, but unlike our other infrastructure, it is thoroughly unappreciated and misunderstood – and that’s bad because we can’t be truly smart consumers or voters in regards to the Internet.

Roads are really boring, but we still can appreciate Spaghetti Junction as a pretty big deal.

Dams are boring, but we still appreciate Hoover Dam as a pretty big deal.

Electricity is taken thoroughly for granted – but we know what it means for the power to be out during an ice storm.

The Internet gets none of that. It’s a really big deal but we take it for magic.

And when we say “the Internet is slow” – the feeling is sort of like the lights flickering and saying “well, the Gremlins are at it again!”

We really have no idea.

Tubes was a great story, well-told, and well researched. He gets a bit rambling and repetitive in the beginning-middle – and the book has quite the windup, but it’s all well worth the story.

You can see pictures of Internet places in his pre-launch Wired Magazine piece here.

And how will this post get from my laptop (I’m currently now on the campus of the University of Georgia, not at home) to my hosting company in Houston, TX?

Using tracert and GeoMapLookup – it look like it’s going to leave the Miller Learning Center at the University of Georgia in Athens, GA, travel a short distance to UGA’s data center in Oconee County. From there – it looks like UGA has a direct hookup with a major trunk line provider called Qwest at their data center (makes sense since UGA is a pretty major research university – no middleman ISPs).

From there it travels to the outskirts of Kansas City (to a major hub mentioned in the book), where it pings around for a bit, before heading down to another major hub in Dallas, TX.

Then it goes travels down to Houston, TX – all in about 2 to 3 seconds.

Pretty boring – but amazing all at once.