You are here: Home / Reviews / Books / Headhunters on My Doorstep by J. Maarten Troost Book Review 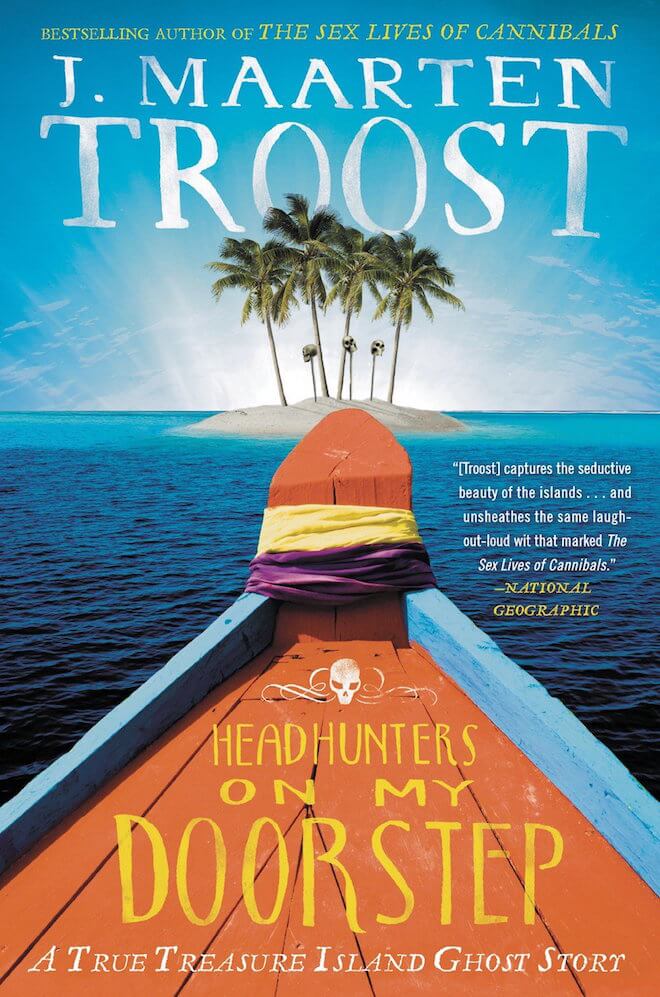 Headhunters on My Doorstep is a double-revisiting of travel journeys. J. Maarten Troost retraces the steps of Robert Louis Stevenson’s voyage In The South Seas, but he also revisits his own time in the South Pacific which gave him his initial fame with Sex Lives of Cannibals.

The book has 3 narratives woven throughout as Troost visits islands of French Polynesia, the Gilberts, and Samoas. First is the main travel narrative. It’s the straightforward I went here, did this, experienced this classic travel narrative.

Second is the historic narrative featuring Robert Louis Stevenson covering not only his 19th Century journey, but also anecdotes about one of the world’s most celebrated (and oddest) writers.

And third is the narrative of Troost’s recovery from alcohol addiction. 9 months before starting the research for this book, Troost landed in rehab – and writing this book was sort of his return to a big professional project without the addiction.

Headhunters on My Doorstep: A True Treasure Island Ghost Story
See Price on Amazon Also may be available at your local library!

Actually going somewhere cool & off the beaten path. One of the reasons the South Pacific is so idyllic in popular imagination is that few people actually go there. It’s multiple days of air travel from everywhere but Australia and is ridiculously expensive. It’s rare to find a writer who’ll travel to a region that remote and give an authentic, transparent & readable travel narrative of what the region is actually like (ie, not someone funded by a resort or travel magazine). Troost did it well with Sex Lives of Cannibals & Stoned with Savages – and this book certainly lives up to the same.

A fun read. The anecdotes in the book are fun – and he meets plenty of crazy, colorful characters. It’s a fast-paced and really tight book.

Bite-size, interesting history. Even though I had never read In The South Seas – or anything by Robert Louis Stevenson for that matter – having not only the historical context of the islands, but also what they meant to a 19th Century writer like Stevenson was fascinating.

Personal voice. Lastly, once Troost got the necessary backstory of his addiction out of the way, having the inner personal narrative with the book was really well done. I actually put off reading the book because I assumed the addiction backstory would be sort of depressing (and who wants to be depressed reading a book about the South Pacific). But (minor spoiler alert) the fact that he does stay sober throughout and the fact that his soberness creates several experiences he would have never had otherwise – not to mention simply creating a more personal story makes the overcoming addiction narrative a solid part of the book.

Shorting the Samoas. The South Pacific is huge. It’s also really tough to get around. And because of that, the time Troost spends on each island really varies. That’s cool in one way since he got a lot of stories from the Marquesas, but I also felt like it shorted both the Gilberts & especially the Somoas. In a way that fits with In The South Seas (Stevenson skipped over a lot of traveling), but it also really makes it a book about French Polynesia more than a grand tour of the South Pacific.

Unexpected seriousness. Note – I hate to include this in the “what I didn’t like” section, but it is something to be aware of when choosing the book to read. So while having his addiction recovery as part of the overall narrative was a great addition, the chapter where he outlines the whole backstory is really, really saddening. Troost tells the story in as humorous & honest of a style as possible, but you can’t get around thinking about his friends & family during the episode. Addiction is something everyone should understand and be aware of, and this book is certainly a recommended way  of becoming more aware of it, but it’s still something to keep in mind when you sit down to relax and read about the South Pacific.

Too much old, weird, white guy. The Robert Louis Stevenson narrative was interesting, but mainly interesting for the historical context it gave for the islands. So while the stories that came out of the writing of what Stevenson’s trip meant and how it related to other authors & history, the writing about Robert Louis Stevenson the person was quite boring, and really the only skippable parts of the book.

If you love travel writing, J. Maarten Troost is one of the best, and Headhunters on My Doorstep will not disappoint. Be prepared for the addiction narrative – after the backstory is done, it really adds to the book. Also, I recommend reading up on Robert Louis Stevenson’s wikipedia page before diving in. Otherwise, check out the book, it’s well worth a read.