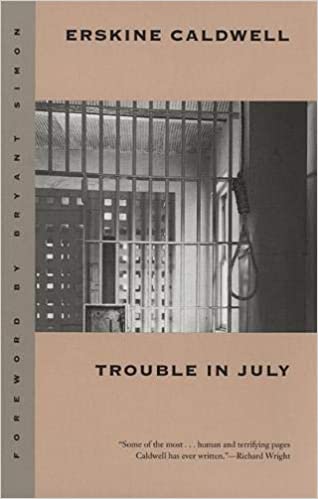 Trouble in July is part of Erskine Caldwell’s trilogy, alongside Tobacco Road and God’s Little Acre, exploring the American South during the Great Depression.

Of the trilogy, it’s the book that revolves around the themes of race relations, lynching, and the day to day experience of living in a world where white supremacy and racism dictate everyone’s life. Here’s a reviewer quote from the back cover.

Trouble in July conveys better than anything else I have read the quality of a community obsessed and held in bondage by a race prejudice.

It’s not a super-happy book, but it’s also a book that is blunt & instructive in how cancerous and toxic racism can be. I don’t know how the book stands up in critical reviews, but it’s a book that I wish I had read in high school. Like the best novels, it conveys the inner life and experience of living with & dealing with racism in a way that textbooks, lectures, and movies cannot capture.

The book is short, fast-paced, and direct. It sort of reminds me of an Ernest Hemingway novel – or, for a more recent author, of a Mosin Hamid novel. The characters are memorable and easy to remember. The plot is obvious and simple to follow. It’s just a solid read.

The setting is somewhat fictional, but also very relatable. It’s set in Northern Georgia, but could be anywhere in the American South. It’s descriptive and memorable.

The dialogue is very true to life and uncensored. This book was not written in 2021 with imagined 1930s dialogue. It’s written by someone in the 1930s who wrote as a real-life version of his characters would speak. In some ways, it’s disturbing and jarring, but overall it’s a positive because it contributes to the book’s overall theme.

The book explores the inner-life and decision-trees of different characters well. There’s no mistaking the tradeoffs, wants, and needs. He captures the full nuance of racism and how seemingly harmless and self-interested choices just feed into the general evil of racism.

It’s plain to see how racism and white supremacy act as a system rather than simply individual choice. Unfortunately, so many books & movies about race relations in America follow the trope of focusing on “that one super-obvious white bigot” that literally no decent person – even in 1930s Georgia – would identify with and making sure they (not regular non-bigoted people) cause all the problems. Caldwell doesn’t follow that trope. In fact, the gang of lynchers does not get a lot of attention at all. Instead, the focus is on characters like the county Sheriff who spends the entire book trying to protect his job, family, and his Black friend or the respectable county socialite promoting a petition “for the betterment of both the white and black races” or the white sharecropper just trying to stay out of trouble and keep the peace.

There’s nothing about the book as it is that I didn’t like or would change.

That said, it’s a sad and uncomfortable book. It has disturbing language, so it’s hard to wholeheartedly recommend to just anyone.

His treatment of Black characters is not great – they lack much depth and agency (even though the lack of agency is part of the larger themes in the book).

The inner lived experience of living in an avowedly white supremacist or segregated society meant awful tradeoffs and life for everyone. It’s really lost in 2021 just how absolutely toxic a racist society is and how it draws in people with the best of intentions. Unlike other nonfiction that I’ve read, the book really tells a story with the inner thought life of just regular people living under Jim Crow. It really helps put in context the world that my grandparents grew up in and what that world was like.

The logistics of a lynching, the true purpose, and how it affected a community. My history lessons at high school did not talk about lynchings at all. I grew up under the impression that they were just awful murders committed by “Bad People” – but nothing more. After reading Grant, The Warmth of Other Suns, and Trouble in July, I’ve learned that it was terrorism used systematically to keep a population in place. Even though the overwhelming majority of white Southerners did *not* approve…they were also allowed to keep happening, again, because the entire society pushed individuals to act in a way to keep the whole thing going. It reminded me a bit of White Flight.

Overall – I definitely recommend it, especially if you are interested in the American South or Southern Gothic.