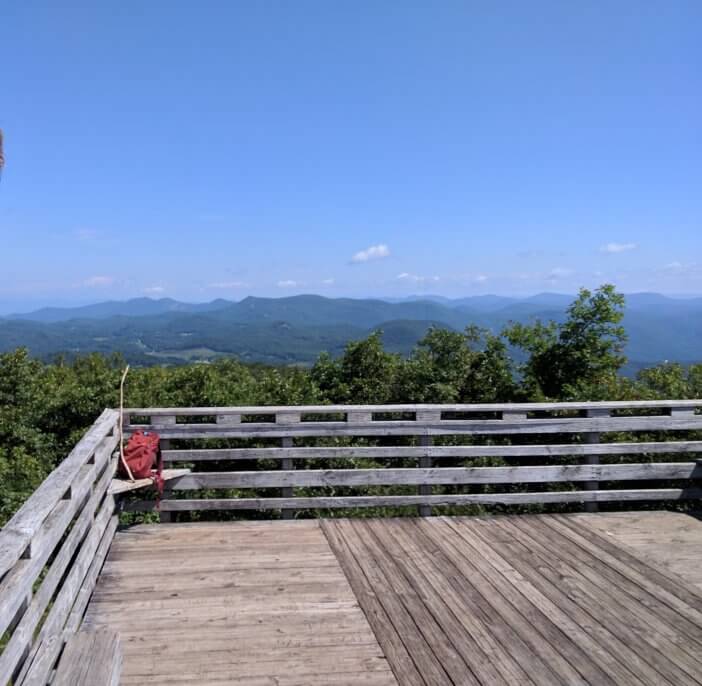 Rabun Bald is the 2nd highest point in Georgia behind Brasstown Bald. But unlike Brasstown Bald, it’s only accessible by foot, so it’s a much less crowded & less car-influenced vibe.

The trailhead is nearly hidden on a bend off the Forest Service Road. I would have driven past it if I hadn’t been counting the mileage.

The trail itself is well-maintained…but has quite a bit of summer over-growth. I’m sure it’s wide open in the winter. I’m also sure it gets a good bit of weekend traffic. But on a random Tuesday, I had it all to myself.

Most of this area of the Chattahoochee National Forest was intensively logged, but it’s also one of the older parts of the National Forest, so there’s a lot of solid second growth forest. Lots of white oaks and hickories.

The trail itself is nearly straight up with very few flat areas for a decent break. It’s pretty intensive for Georgia.

Even in late summer, there were a *ton* of flowers out. Lots of birds. Since Rabun Bald is one of the highest mountains in the region, it gets a lot of rainfall and a lot of migratory birds.

In the summer, you don’t get a ton of views until you’re at the top. And even there, you only get views from the abandoned fire tower platform. Rabun Bald is definitely not a “bald” anymore.

But up on the platform…the views are incredible and well-worth the hike. Rabun Bald has great isolation so you can see clearly to South Carolina and North Carolina and far off into west. Looking to the east, north, and south – most all of the land is National Forest, so there’s very little development with just rolling green Appalachian mountains. Highly recommend.