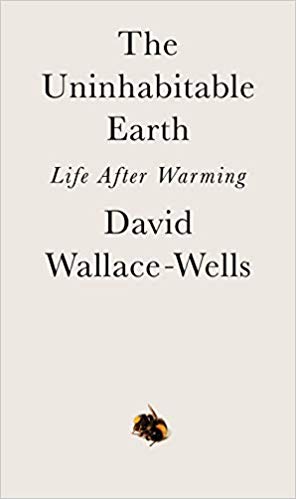 The Uninhabitable Earth was a runaway bestseller in 2018. I, like many buyers, found it via the author’s 2017 article in New York Magazine.

But it raced to the top of the queue after the 2018 IPCC Special Report in addition to Best Book award from a bunch of outlets.

The book has been…controversial. I’ve read plenty of the criticism, especially from climate scientists. In fact, so much has been written about this book – and so much has happened since publication – that I hesitated to even write a review at all.

But, these reviews are mainly for my future self, and if anyone stops by and finds this review interesting – awesome! So here’s my notes.

Wow, there’s a lot that I liked about this book. Here’s a non-listicle, listicle.

General Approach. I do understand critics’ warnings against scaring people into non-action. But I also thought the author addressed that in the introduction. I liked his point that the time has past for unified, careful messaging. For a more useful analogy, I’d understand if Oncologists in general want to emphasize treatment options among patients. But if *I* had Stage 4 cancer, I’d want to know the exact prognosis and treatment options. We are at that point with the climate crisis. I personally don’t want to tell my children in 10 years that “I never thought it could be this bad” – I want to tell them that I knew all the possible scenarios and took the best actions that I could take as an individual. Uninhabitable Earth gives the best-science based visuals of worst-case scenarios that I’ve seen.

Background. I liked how the author explained the book’s approach. I know not everyone will read the Introduction, but I thought it was one of the best parts. Climate Science is maddeningly difficult, not because the geophysics are tough – they are actually pretty simple, but because *humans* are so hard to predict. Climate Science can only provide a range of if/then scenarios. These scenarios have historically been correct. However, it still makes for a counter-intuitive read. But the author does a good job setting the reader up for success.

Organization. I liked how the book was organized into themes. The toughest part about the climate crisis is that it touches – everything. And when everything matters…no one thing matters. But since he divides the book into themes, you can really get a grasp about how every aspect of life will be touched by global heating.

Visuals. Ok, there are no pictures in the book. But you can tell that the author is an amazing writer. He can paint pictures with words that would be hard to depict in an image, especially when so much about the climate crisis involves psychic pain or emotional pain of loss.

Directness. The book is short, concise, and direct. It’s about humans. In fact, in the first chapter he talks about how he used to think that Nature was a thing over there. We ought to protect it, but it’s technically optional. He’s direct about the fact that Nature is not over there – we live in it. Climate change is not necessarily about protecting polar bears. It’s about protecting humans and stopping unspeakable human suffering. It’s about living in ballpark the same climate that has existed since before humans took up agriculture. He talks directly about the personal effects – no “increased populations” instead “more diseases from mosquitioes”.

That This Book Exists. The time for slow, methodical action against a changing climate was back in 1990 when I was 5. Instead, we doubled down. I remember Leonardo DiCaprio and Al Gore talking about lightbulbs in 2000 as a teenager (while the adults and classmates mocked them). Even if high-level policymakers stick to the script, I want to know what will happen if we just keep doing what we are doing. The nuclear war and overpopulation scares of the 1960s were about imagining a world in which we *did* a thing and something horrendous happens. This situation is in reverse. We are currently doing a thing, and need to imagine a world in which we don’t *stop* doing a thing.

If nuclear war was like imagining what would happen if we accelerated our idle car into a brick wall, then the climate crisis is like we are currently barreling towards the wall and debating about how & when to hit the brakes.

Solutions. The author dismisses radical decarbonization. He goes right to speculative technology. I think he’s right…but I also wish he’d described a radically decarbonized world in detail. I don’t think we’ll do it…but not only is it within the range of imagination…we’ve already had experience with a modern world running on less carbon.

Actual Visuals. I think he was right not to include lots of artists’ representations and pictures. But I think a few maps and charts would have helped. Even the basic ones from NASA to show carbon, scenarios (the book is mainly about RCP 8.5) and temperature changes –

The climate crisis is the most complex challenge humans have ever faced. I’ll let the professional reviewers, climate scientists, and high-level policymakers provide takeaways.

However, the book did remind me of a quote from Mike Philips, the famed conservationist, on his interview with Tim Ferriss. When asked if his work on the environment gives him hope or despair, he said “there are some days where I feel one or the other, but mostly I just feel like there is work to be done – and that is what I focus on.”

*Also – vote Democrat if you are in the US. Join an organized group. Make the individual changes you can while the existing system is in place.

A very well-written description of the current path we are on with the climate crisis.