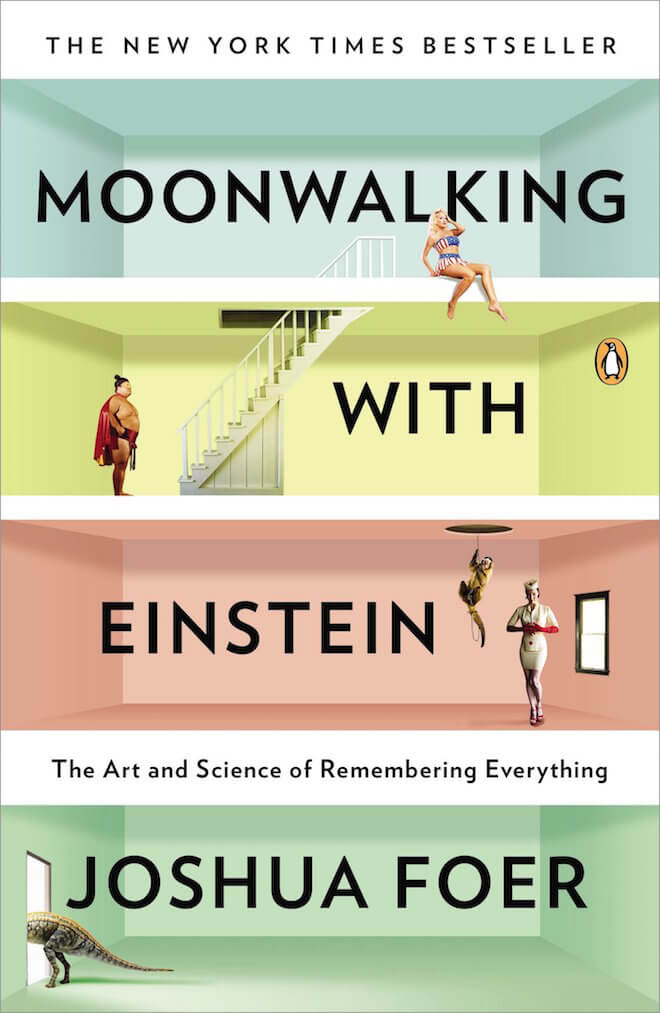 Just like so much else, improving memory is about understanding the skill, learning the right approach, and deliberately practicing it over and over and over.

The unfortunate bit about memory is that the skill of memory was common knowledge among the ancient Greeks and Romans – laid out in the book Rhetorica ad Herennium, but has slowly been forgotten over the years as pen, paper, calendars, Post-It, and smartphones have slowly made it a not so useful skill to master.

And yet – there is a small subculture of people who strive on not only using the techniques to compete, but also improving and perfecting them to do really quite unimaginable feats like repeating pi from memory to 22,000 digits.

No crazy brain or genetics required. Just a ton of practice with perfected techniques.

The crazy thing is that the basic technique is so simple that I memorized the 15 item grocery list in the book as the author was walking through it.

The key is to combine your senses, and spatial memory to make something memorable, since very few people can hold more than 7 things in working memory.

The best way to illustrate the technique (called the “memory palace”) is this: imagine you were dropped into a stranger’s house for 5 minutes. You could walk around, look, touch, smell, feel – but then you were taken out after 5 minutes.

How much of the house could you remember? I bet you could remember a lot more than 7 things. You could talk about layout, objects, smells – you could probably even do a full sketch of the floor plan from memory.

The reason is that now all these things have context and an association with them.

So – to memorize a list, groups of words, or anything at all – you have to create an image of that word, concept, etc – the more memorable, the better – and “place” it into a physical place in your mind that you know very well – like your childhood home. As you walk through your “memory palace” – you’ll find that your brain has automatically stored the image there.

Joshua Foer of course does much better justice to the technique in the book – but that’s the basic overview of the concept.

And that better justice is another strong point to the book. It’s not just a how to book for better memory. Moonwalking With Einstein is also 1/3rd science writing about how memory and performance actually work, and 1/3rd his adventure training for and winning the US Memory Championships – and the subculture surrounding it.

The ironic bit about the whole book though is that as enlightening as it is about memory and human potential – Joshua Foer still concludes that there are very good reasons why we use our external memories the way we do. There is a reason why I started reviewing every book I read rather than just assuming I’ll remember the important bits.

Our learning has by necessity become a mile wide and an inch deep. Our memories are now geared towards remembering how to find that something, rather than what that something is. That’s not a bad thing, or a good thing – it’s just how the world is now. And – our external memories are quite good at what they do.

And yet, it is refreshing and affirming to know about the potential of memory so that I can make the choice to use and appreciate my calendar, Google, Wikipedia and LastPass, rather than feeling stuck and dependent on them.

However, I definitely think there is a lot of day to day uses for the memory palace. I had memorized my credit card number by rote, but still get it mixed up sometime. So memorizing that, my license number, and other key personal info via memory palace will be really useful.

Not to mention being able to beat my siblings at Sporcle – and maybe learning how to memorize a deck of cards would be just outright fun.

Moonwalking with Einstein is a very worthwhile, fun read. It’s on the library-buy list, so unless you live in the boondocks – you can probably grad it at your local library, or pick it up cheap at Amazon.