You are here: Home / Reviews / Books / Behind the Beautiful Forevers by Katherine Boo Book Review 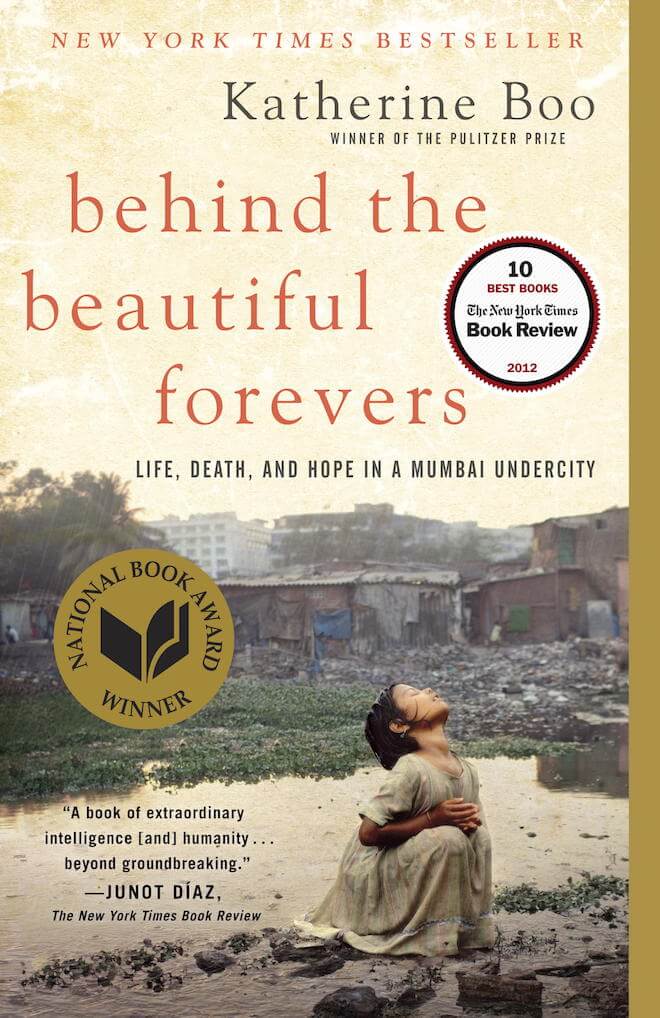 I’ve tried to read books from a diverse range of settings and countries, but aside from the outstanding Sea of Poppies, I’ve read very little about India.

It’s always seemed like such a daunting, chaotic, overly-diverse topic. And there’s never been a travel book, class or fiction book that’s piqued my interest. I’ve binge read plenty of books on China – which is just as daunting, chaotic and overly diverse, but embarrassingly never on India.

In the last year, my interests have been piqued. I now have an incredible new family by marriage from India. Time to get to know the country that is arguably going to dominate the headlines of the 21st Century.

And Behind The Beautiful Forevers by Katherine Boo was the first book on India that I picked up.

It’s not a history. It’s not an opinion piece. It’s not journalism. And it’s not fiction. It doesn’t even try to say anything it’s hyper-specific story. And in a way, it’s a perfect introduction to India.

Behind The Beautiful Forevers is a non-fiction narrative that tells the story of a couple families from of one of Mumbai’s slums for one year after the 2008 Financial Crisis.

Behind The Beautiful Forevers is based on the author’s interviews, primary research, and investigative reporting in the Annawadi neighborhood near the Mumbai Airport. She started the project with no predefined story, conclusion or goal. She just followed a few residents around for a year. She asked them why they did the things they did, and supplemented it with research into government documents, outside interviews and local news stories. The narrative she crafts is focused, captivating, fast-paced, and descriptive. Here’s what I did and didn’t like – and lessons learned.

It’s tempting to read the book as a microcosm of India. But reading it brought me to a different conclusion: in a country as big and as diverse as India, there is no such thing as a microcosm. The lives of the individuals in the book are so unique, so nuanced, and so diverse that you can’t say “this is India” or “this is Mumbai.” To write that sounds arrogant, narcissistic and pretty ridiculous – but that’s how everyone stereotypes everyone else. The kids in the book even stereotype Westerners and rich Indians based on the people staying at the hotel airports. I know I’ve been guilty plenty of times for watching a single film and viewing it as a perfect picture of a country. I know that viewers of Noisey Atlanta have a not-accurate-at-all idea of Atlanta.

Main lesson – microcosms are constructs. Every individual, no matter how different from you; no matter how “typical” or “representative” they might be, have just as rich and nuanced of a life as you think you yourself have.

The other lesson I took away from the book is just how connected the world is now. The current wave of globalization is truly incredible. Everyone who has ever noticed a “Made in China” label knows it. But it’s fascinating to think about how my recycling and purchasing habits has direct impact on migrants to an Indian city.

It’s also interesting to understand how incentives and rules set in one part of the world can have a ripple effect elsewhere – particularly with non-profit giving and aid policy.

Whether you are interested in India or just want a fast-paced, engaging, unique narrative, Behind The Beautiful Forevers lives up to its National Book Award winner and New York Times Bestseller status. Highly recommended.