You are here: Home / Reviews / Books / Writing on the Wall by Tom Standage Book Review 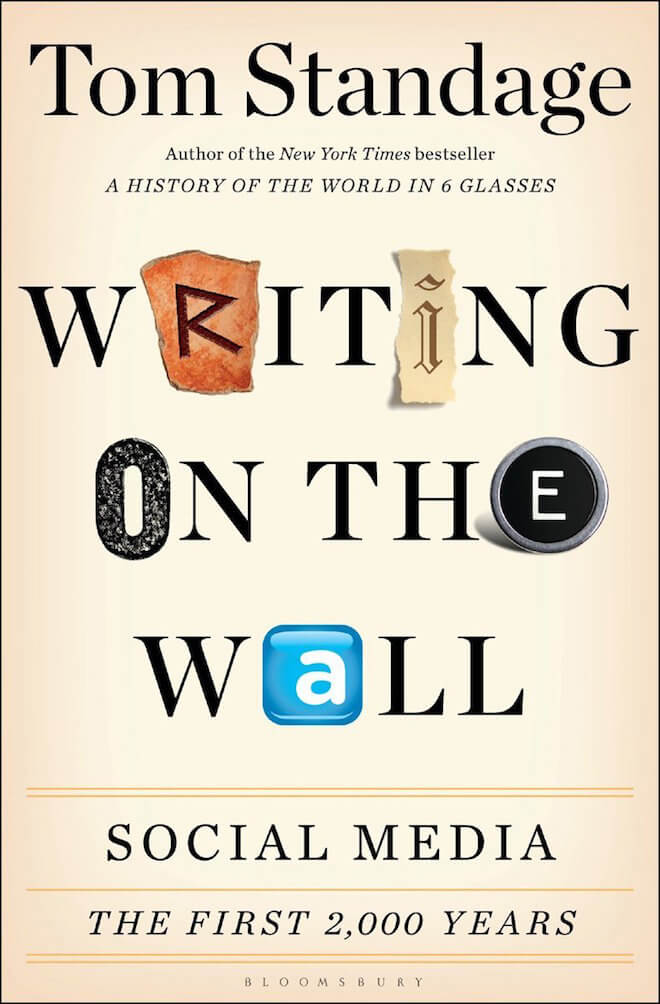 I originally read Tom Standage in The Economist where he’s an editor & columnist and writes the best Holiday Issue columns of anyone at The Economist.

He’s written other excellent books like Edible History, but Writing On The Wall specifically looks at social media throughout human history, particularly since the Romans.

If you listen to most breathless journalists, worried parents or sketchy “social media marketing ninjas,” you might think that social media kicked off with Friendster, MySpace and The Blogosphere until Mark Zuckerberg and a little blue bird stole the show with Facebook & Twitter (along LinkedIn, Google+, YouTube, SnapChat, Tumblr, Pinterest, Instagram, Weibo, etc).

The argument that Tom Standage drives home in a fun, fascinating way with Writing On The Wall is that social media is not new. Rather, the current crop of Internet based sites are part of a long tradition of communicating & sharing in a 1 to 1 fashion – directly with a specific social network.

Social media simply stands in contrast to broadcast media – both of which have been around since humans started writing things down, but really became essential to culture during the Roman Empire.

During the Roman era, messages were simply letters & manuscripts that would be shared with friends and marked up with messages and marginalia. Tom Standage made the note that having slaves was basically like having broadband – everyday they would make rounds with small messages on a running manuscript to everyone whoever their master followed and/or was followed by.

Christians were possibly the most active users of social media – and spread so quickly partly because of the viral nature of social media. The Apostle Paul was the ultimate & first “social media ninja.” His letters circulated and spread throughout the Empire – with Roman versions of “tweeting at” and [Please Retweet] all included in his most influential letters.

But Tom Standage doesn’t just spend time establishing that social media goes way back, he continues through history looking at how even though the historical context & specific tools may change – the medium never changes. It’s an integral part of humanity. And if there’s anything that is anomolous in history, it’s the period from 1920ish to 1996 where the power of broadcast media was so dominant & successful (because of novel tools) that it received an outsize bit of people’s attention until the Internet came along and re-empowered the social medium that has always been the more powerful of the two.

Writing On The Wall has a fascinating non-fiction narrative. It’s not a “X happened, then Y happened, then Z came along” type history book. Tom Standage has an argument and shapes a narrative that’s readable, entertaining & engaging.

The book has lots of cool anecdotes. It’s really obvious that Standage didn’t just come up with an idea and lackadaisically talk in general terms. He went an dug up actual letters with interesting factoids like Roman versions of emotions & LOL.

It’s a very applicable & relevant book to everyday life. Unlike say, the Decline & Fall of the British Empire which provides useful but very broad, generation scale lessons, social media is something most all of us use every single day. Looking at how & why it has been used in years past is interesting particularly because it’s something we use & participate in everyday.

Even the best non-fiction books seem to suffer from an extended boring-ish section about halfway through, and Writing On The Wall isn’t any different. There were several digressions where I either skimmed or skipped through.

Social media is not Facebook + Twitter. Nor is it new. It’s not only been around for quite a while; it’s a normal component of human society. Facebook, Twitter, etc are just our current toolset to communicate, share & interact with each other directly. And that’s a good thing.